Atea Danmark A/S is a leading Nordic and Baltic supplier of IT infrastructure with over 6,000 employees. The company provides system integration in 83 cities throughout Norway, Sweden, Denmark, Finland, Lithuania, Latvia, and Estonia, delivering IT products from leading vendors and assisting customers with IT infrastructure services through its team of 3,700 consultants and supporting 7,500 technology certifications. With a robust staff, Atea’s list of projects is extensive to say the least.

With that in mind, Atea system designer Peter Mejer and Atea as a company are both long-time D-Tools users. “Before D-Tools, I did everything by hand, including cable plans and labels. I searched the market for the most valuable, easy-to-use system integration software and simply made a choice of the most effective product found—D-Tools System Integrator (SI) platform,” says Mejer. “At InfoComm 2002, FotoPhono (acquired by Atea in 2011) discovered D-Tools and immediately signed on as one of its first international customers.”

Since then, D-Tools is the company’s go-to for managing and streamlining complex projects. Take, for instance the University of College Copenhagen, Campus Carlsberg. Mejer and his team won the bid for this project using a proposal created in SI. The project was massive, including the installation of three auditoriums, three gyms, one cantina, one atrium, two drama halls, one dance hall, and one student’s café. Atea also installed multiple systems in additional locations in Hillerød, northern Sealand, and in Bornholm, eastern Denmark. D-Tools’ data-driven process made it easy for the company to create a fast, accurate, professional looking proposal with the University’s project needs and budget in mind.

“All locations are able to share presentations and audio through a standard network, with standard switches. Each location can also dial in any presentation from any teacher or student, anywhere on campus,” says Mejer. The campus is the first of its kind in Denmark, and is probably also the biggest Higher Education campus installations in the country so far.”

Keeping track of every part of the project, including pricing, packets, serial numbers, IP- and MAC addresses, was of upmost importance on this large-scale project. “As we face AV being more and more oriented towards networking technology, we have a major challenge keeping track of this type of network information,” says Mejer. “D-Tools provides the only solution that’s able to fulfill our requirements for keeping track of everything. Further, it integrates perfectly with Visio, and the D-Tools support and development team are 100% dedicated when I have requests for new features, or have run into any issues.” 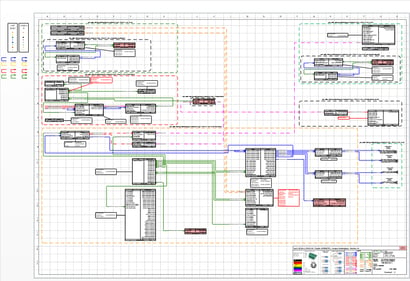 For all locations at UCC, except Hillerød and Bornholm, Atea used a mixture of the campus’ existing equipment, and installed Panasonic laser projectors, Projecta screens, Barco networked room controllers, Powersoft amps, Symetrix DSPs, Atterotech Dante units, Community loudspeakers, Cue control systems, an NEC video wall comprising 16 screens, and Cisco switches. That’s a lot of equipment, not to mention a lot of wiring. D-Tools SI drawing capabilities allow users to connect the entire system within a Schematic page, showing point-to-point connections, and enables them to then generate installation reports such as Wire Schedules, Wire Checklists, even generate wire labels for the entire project. Detailed input/output information can be captured in the catalog and visualized on a schematic drawing for detailed documentation before and after the installation.

“Again, keeping track of serial numbers, plus IP- and MAC addresses was essential for us. Using custom fields for this in D-Tools was a big help,” says Mejer. “The ability to have cable numbers at both ends of the cable is fantastic. It also makes it easy not to forget components, like a switch or extender.”

But more than anything, it’s the speed that D-Tools has enabled in the Atea workflows that has been a boost to the company’s business: “Speed, from the rough idea to the first drawings and purchase orders to the speed when making changes, is very important for us. Additionally, by automating reports, i.e. cable plans, purchase orders, cable labels, picklists etc., it reduces the time-consuming processes of making these things manually.”

Not only does D-Tools SI software benefit customers like UCC by giving them a fast, reliable and working first-time installation, it has accelerated project business processes by approximately 15%, while employee time on tasks has been reduced by 20%, according to Atea. Mejer adds: “In general it’s pretty close to as perfect as you can get.”

Whether Atea is working on a massive, networked connected campus or a smaller job, D-Tools SI has served the company well over the years. And while it was one of the first international users, Atea has its eye on the future and will continue to graduate its business with D-Tools in its locker, while schooling the competition.